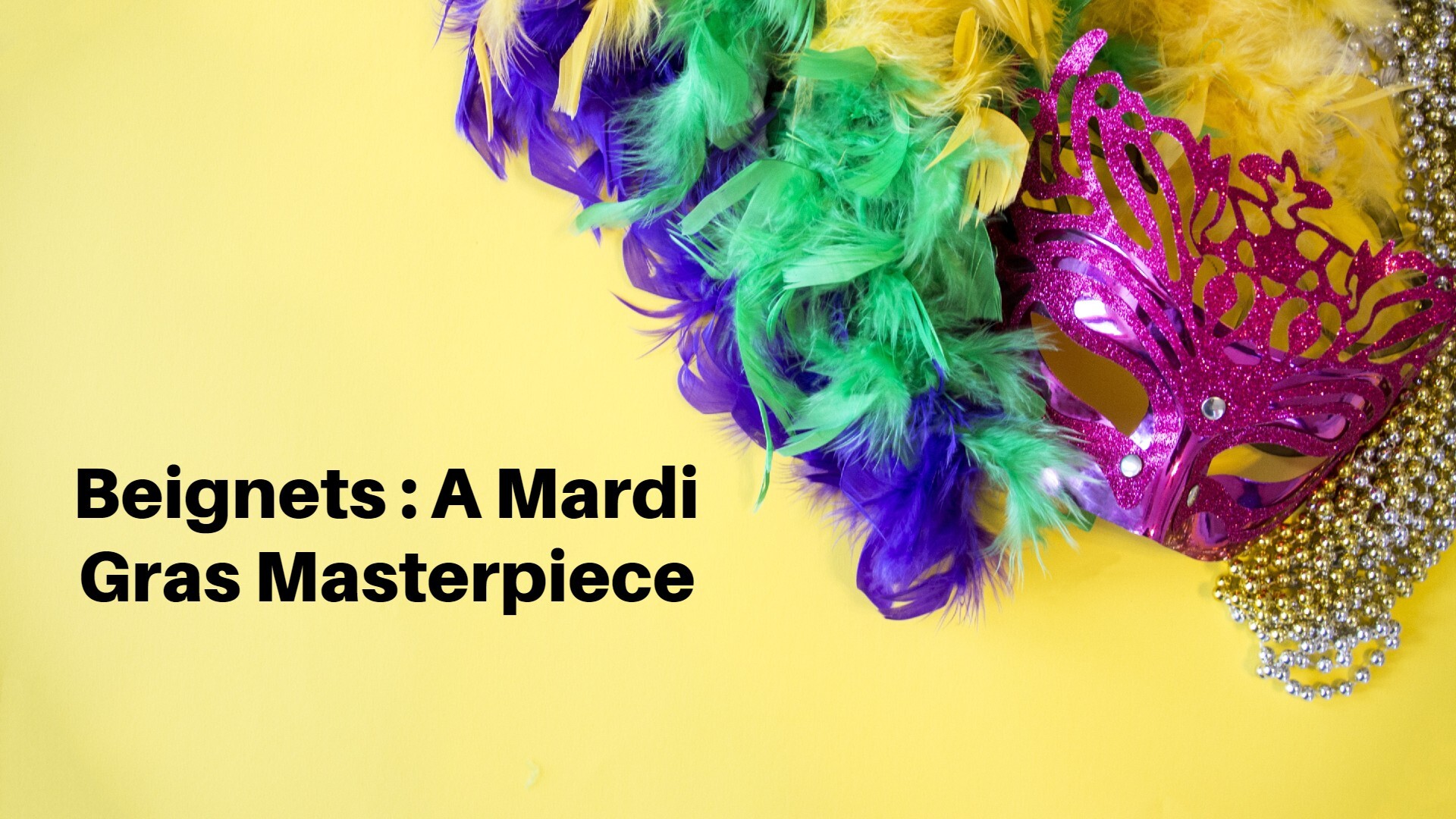 Citizens of the Space City, the time is now fast approaching to dust off your picnic gear, purple and gold costumes and find the biggest bags to take away all the nice beads from the parade. Mardi Gras is here! The exciting spectacle commences all over New Orleans and here in Galveston on the 16th, and we absolutely cannot wait to get in!

Although it has a lot of elements concerning why people enjoy the colorful festival so much, we’d like to talk about one in particular; the fascinating French fritters known as beignets, the tradition surrounding them and why they’re a delectable option even aside from the festival that is known for them.

The tradition of beignets reaches as far back as the Ancient Roman civilization, where cooks would make Scriblita, a Roman pastry made from soft, moist dough, boiled in animal fat. From the Romans, the beignet travelled to France, where cooks started using choux as a workaround for yeast, since the steam helped it rise and puff anyway. Afterwards, some believe that the fried goods were carried across the pond by Ursuline nuns yet others speculate that it travelled all the way to Canada.

Either way, loosely translating to ‘fritter’ in English, the extravagant beignet was then introduced to New Orleans inhabitants in the 18th century and were made popular in the USA, culminating in the dessert being named the state doughnut of the New Orleans in 1986.

Beignets are a marvel to look at and magical to taste, and the wizardry that happens behind the scenes (or behind the counter ;)) is a sight to see. Traditionally, there are two ways to make these fantastic fried confectioneries, either from a choux pastry or by leavening yeast in dough. Traditionally, though, American beignets and donuts are usually made with yeast. Now, choux doesn’t necessarily have a lot of rise, what it has is a lot of hydration, which means that beignets puff up quickly anyway due to the hot steam produced while frying. Our good friend yeast on the other hand produces carbon dioxide and produces more complex flavors due to fermentation, and hence the popularity. After the frying process, these sugary delights are then dusted with sugar and served hot!

Never Too Much Powdered Sugar

Beignets today don’t have holes in them, and with that much confectioners’ sugar laden on, we wouldn’t advise anyone with an affinity for wearing darker colors to eat them casually, in order to not accidentally end up as a fashion casualty. We assume most of it is going to be on your face anyway.

A Festival of Festivals

Mardi Gras has a special place in every French and Cajun heart, but at the same time it makes its way over to the rest of the world. Performers and revelers wear bright, eccentric costumes or at least dress in green, gold and violet, adorning themselves with long beads caught from parades past. Both locals and visitors have a ball and sit on the ground, throw balls, play music, eat great food and watch the crowds walk by. All non-essential businesses are shut down because after all, who doesn’t love parades? And carnivals? And great food on top of that? Count us in. And whether you like to go be a part of the extravagant celebrations here in Houston or Galveston, or watch it from the comfort of your home and TV with a strong cup of café au lait, MyShipleyDonuts has a solution for you to enjoy beignets whenever and wherever you desire.

Although Louisiana and Houston are more than 300 miles away, the tradition of these fritters extends to MyShipleyDonuts as well, and we make sure that it is upheld in all its glory, and quality Houston beignets are provided to our customers no matter if it is ordered online or enjoyed at one of our stores and drive-thrus (open 24/7). We make them fresh for exactly when you need to satisfy your beignet craving, we make them sweet, and we make them our own way, with yeast, and high temperature oil.

Get our made-to-order, puffy and warm delicacies for your dose of the Big Easy this Mardi Gras today!