Does Shipleys Have Kolaches? Yes, It’s A Texas Thing 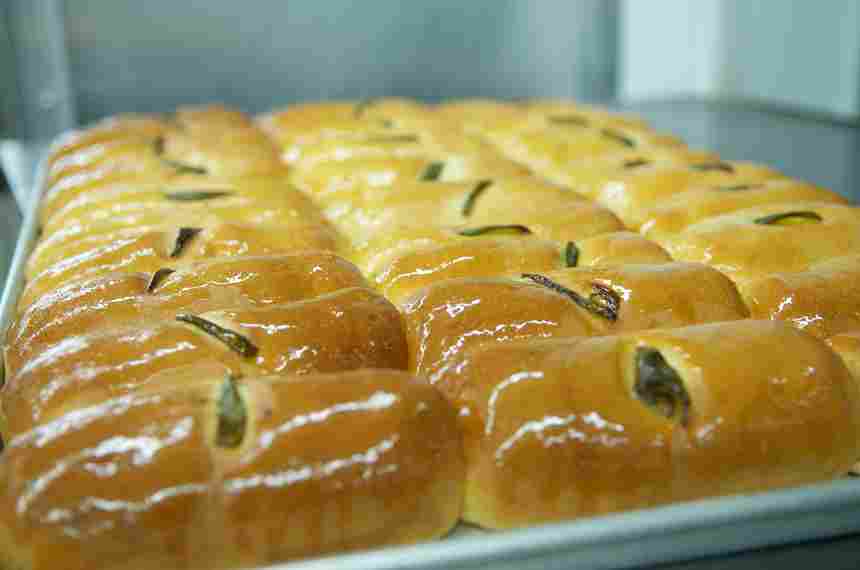 Here at Shipley’s, our donuts are our pride and joy. However, if you’ve been wondering “Does Shipleys have Kolaches?” We would like to direct your attention to the sausage, cheese, and pastry delights that are our Kolaches! (pronounced Koh-la-chee)

You can get them in South Dakota, Nebraska, Texas, Oklahoma, Iowa, Wisconsin, or anywhere within the continental US.

There is also a slight chance that if you walk into a bakery somewhere in the north and request a Kolache, you’d be laughed out of the establishment as some ignorant barista laughs you off, saying “We don’t serve congee, omg!”

But there’s something special about Texans and their Kolaches. 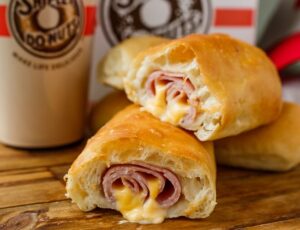 The cultures of its people influence Texas cuisine. This has enabled a distinctive Texas cuisine; a cuisine rich in flavors ranging from Tex-Mex, chicken fried steak, barbecue, gumbo, or chili — take your pick — that reflects the land and its people.

According to the Texas State Historical Association, Communities of a few hundred Czechs looking for a better life began migrating to Texas before the Civil War. By the early 1910s, the number of foreign-born Czechs in the Lone Star State climbed to more than 15,000.

These were the folks who brought over the Czech language, customs, and kolaches!

Kolache purists maintain that traditionally it is supposed to be a breakfast pastry filled with sweet creams or fruit jams. In fact, Texas-Czech communities clustered in the Central Texas Czech belt are well-known as places to find authentic kolaches.

(Much more reminiscent of what is popularly known today as a ‘danish,’ which we also serve here at Shipley,  just FYI).

The original meat and cheese filled variety were known as ‘klobásníky’ or klobásník (the singular form).

Still, the klobásník, which many believe was invented in Texas, has worked its way into the morning routines of people across the state, in the melting pot of Czech tradition and American innovation.

By the nineties, the klobásník —made from the same semisweet yeast dough as the traditional kolache but stuffed with kielbasa or sausage rather than fruit—had begun to take over Texas. 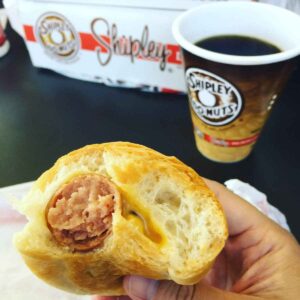 Kolaches: From An Ethnic Treat To A Texas Specialty

The savory variety, which is now colloquially known as Kolaches (We know that isn’t technically correct), is usually armed with the Texas twist of meat (usually a pork & beef sausage), cheese, and Jalapeno because Texas cuisine is always a fascinating blend of old and new!

We want to take this moment to lend our support to the Czech Texans who bravely fight the fight of trying to inform everyone within their vicinity that “if it’s not sweet, it’s not a Kolache!”  We would also like to respectfully inform everyone that we’re going to continue in the texas donut shop tradition of calling a klobásníky by the wrong name *shrugs*.

As stated above- these sausage-filled treats are bakery staples wherever there is a settlement of Czech immigrants. They’ve become especially dear and unique to Texas like anything else that finds a special place in the Texas-sized hearts of Texans, especially in Houston! 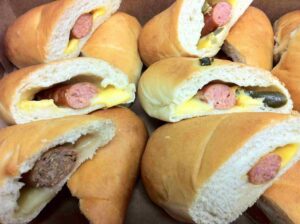 What’s In The Name Kolaches?

Whether you call it klobásníky, kolaches, or pigs in blankets. It has dutifully served the purpose of party hors d’oeuvres, a staple at every school fare or football game, afterschool snacks, a fast breakfast, or just a random treat!

The Kolaches have been on a beautiful journey. From being a nostalgic ethnic treat to being something so quintessentially Texan that the Shipley’s menu would be empty without it.

Donuts would be lonely without this Tex-Czech treat. We know this because they pair delightfully with our donuts in a sweet and savory combo! So get them full-sized or in ‘poppers’ form (They’re fun sized!).

Does Shipleys Have Kolaches? Yes, We Do!

Typically stuffed with cheese, sausage, jalapeno sausage, Italian sausage, grilled chicken, boudin, or ham. You can get our kolaches in a vegetarian version with no sausage at all. Or you can get it with just the sausage and absolutely no cheese.

If you give us adequate notice, we could make ’em special for you with whatever filling your heart desires!

But the most important thing is that you no longer have to wonder “Does Shipleys have Kolaches?” because yes we do! And you can get them now by ordering online!