The History of Birthdays and Birthday Cakes

Try Birthday Donuts Instead of Birthday Cake This Year!

Celebrating birthdays with cake has long been a tradition in American culture, but this Houston donut shop urges you to try something different this year: donuts. Whether you’re tired of the same old cake every year, want to try something new and different, or just love donuts, donuts are a great choice for a birthday treat.

Read on to learn about why we celebrate birthdays, where the traditions came from, and the history of the birthday treats we enjoy today.

Fun Fact: The earliest mention of a birthday party was the Bible‘s reference to Pharaoh’s birthday (3000 BCE).

The History of Birthdays

We can thank the Greeks for birthday cakes. Traditionally, cakes were used to honor the Moon Goddess, Artemis (also known as the goddess of the hunt) – their round shape and the light from the candles resembled that of the moon. Some even claimed the smoke of the candles carried prayers to Artemis. The Greeks would honor Artemis on the sixth day of every lunar month.

Fun Fact: The first recorded birthday celebration for a woman was in the 12th century.

It also has roots in paganism, which is why many Christians historically didn’t celebrate birthdays. Pagans believed that evil spirits visited people on their birthdays and the only way to protect them was to surround them with friends and make them happy. Often, loud noise was encouraged as a way to scare off the evil spirits. 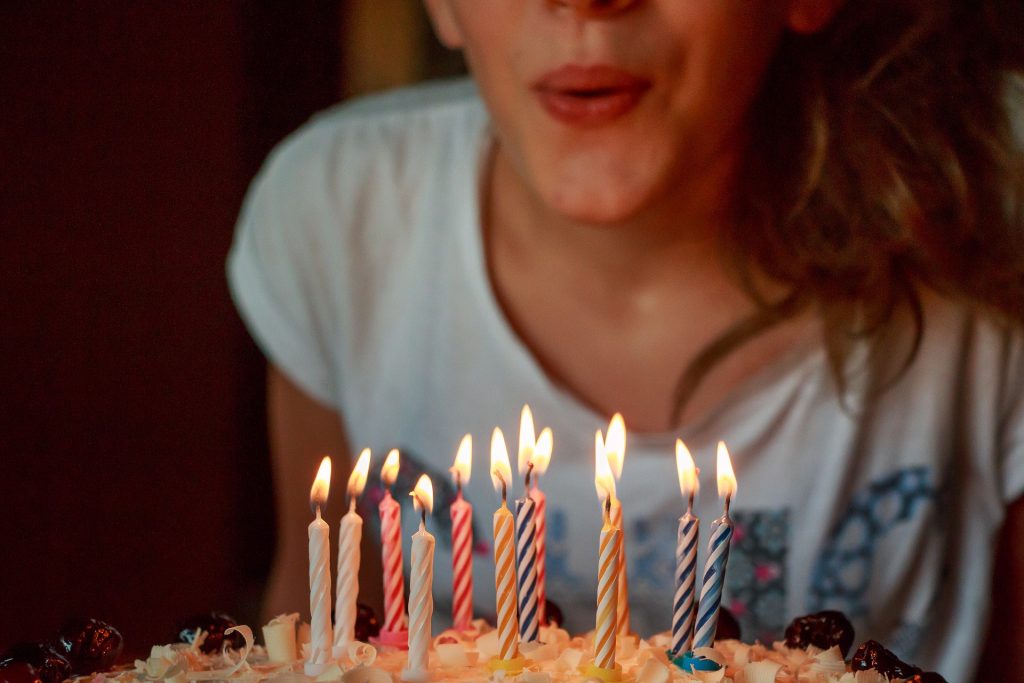 Fast forward to the 18th century in Germany, when Germans began celebrating kids’ birthdays with cake at “Kinderfeste.” Much like the ancient pagans, Germans believed that evil spirits attempted to steal the souls of children on their birthdays. Kinderfeste, then, was a way to protect the child from these spirits by surrounding them with adults who could keep the spirits at bay.

Each cake was topped with a specific numbers of candles representing how many years the child had lived, as well as 1 extra candle to symbolize the hope of living another year.

Each child would then make a wish and blow out their candles – this is how the tradition of blowing out candles started, though some say this started with the Swiss in 1881.

Fun Fact: In Southern tradition, it is said that the number of candles still lit after you try to blow them out is the amount of years until you get married.

However, these cakes were not the same delicious treats we enjoy today. Early birthday cakes didn’t taste sweet and often didn’t have any sugar at all! Ingredients were expensive, so only the rich could afford sweet cakes. Thankfully, as time went on, sugar became more commonplace in birthday cakes.

Birthdays Around the World

Not everyone celebrates birthdays the same way! Birthday traditions around the world vary from place to place, and so do the sweets that accompany them!

In China, birthday celebrations feature the shòu bāo (壽包, simp. 寿包) or shòu táo bāo (壽桃包, simp. 寿桃包), which is a lotus-paste-filled bun made of wheat flour. The shape and colour make it look like a peach. Each guest gets their own.

Korean birthdays are a lot less sweet – the dish of choice is seaweed soup!

Fun Fact: The “Happy Birthday to You” song first appeared in print in 1912.

Russian birthdays are celebrated with fruit pies. The pies often have a greeting carved into the crust.

Sweden celebrates with pound cakes topped with delicious marzipan. These cakes are often decorated with the country’s flag.

Order Your Birthday Treats From the Best Houston Donut Shop

If you’re sick and tired of the same old cake every year, or just want something unique, try ordering something new for a sweet treat: donuts! Even if you still want that cake flavor and texture, ordering cake donuts can hit the spot perfectly. They’re affordable, easy to order, easy to receive – we offer delivery! – and easy to share with friends and family. Order delicious donuts from Shipley Do-Nuts for your birthday celebration this year. It’s the perfect sweet treat for a fun celebration.